Time is passing by and itâ€™s already been six years since we forked Nagios and created Icinga. Lot’s of things happened since then, Icinga is in its second version by now, our community is constantly growing and since last year we have a great success with our Icinga Camps all over the world. At this point we would like to thank our community, because with your help Icinga became what it is now.

Who could’ve expected such a massive warm feedback and familiar atmosphere back in September at GitHub HQ 3.0 – our first Icinga CampÂ San FranciscoÂ was pretty much a blast. And so we took the offer to spread the #icingalove on multiple places all over the globe – Barcelona, Antwerp, FOSSASIA, FlossUK,Â SIG-NOC meeting, OSDC, Rootconf, Opentech Summit,Â Kuala LumpurÂ … more, more, more!
Right after Puppetconf 2015 on the 10th of October 2015 we are proud to hostÂ the Icinga Camp Portland directly at PuppetLabs – I personally can’t wait for that 🙂 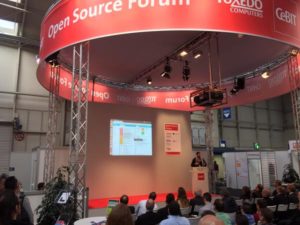 For the first time we had our own booth at the worldÂ´s most famous IT exhibition. The Open Source Forum at theÂ CeBit was the perfect platform to present Icinga to a wide audience. After the talk our booth was surrounded by a crowd of new Icinga fans. Visitors and users enjoyed there the fancy Icinga Web 2 demo and saw how Icinga 2â€˜s apply-services-based-on-patterns works. We enjoyed showing every bits and pieces ofÂ  Icinga and had a lot of fun during this week.

As it seems that the Nagios guys have been removing/banning everything Icinga-related, we’ve come up with our very own plugin and module exchange platform. Next to the Solr-backed search index it offers automated Github sync – the activity in the past months already shows that this extra work was the right decision moving forward. Once Icinga Web 2 and its CLI is ready, weÂ think of automated setup wizards and much more. 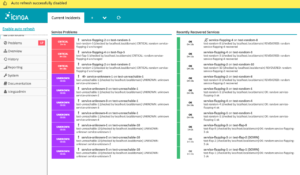 Later in 2014 we’ve been to the OSMCÂ in Nuremberg – where we’ve released Icinga 1.0RC in 2009 – announcing the first beta release of our next generation web frontend Icinga Web 2. The web developers are working hard to improve and fix all the bugs reported ever since – at the time of writing they are wrapping their head around their first release candidate hoping to incorporate everything required for a final release. Quality requires time – so thank you for your patience and overwhelming test feedback and bug reports.
Icinga Web 2 follows the new era started with Icinga 2, rewritten from scratch and abandoning the Nagios roots. Rewritten from scratch, responsive design, fast, looking pure magic, web based setup wizard and much more.

Our journey does not stop here – still looking for new fields of monitoring. The final release of Icinga Web 2 is scheduled in the next months, certainly sooner than Icinga 2 and 2.4 where we will go for a generalized API – more updates on this topic soon. We’ve also put effort into a concept forÂ creating a web based configuration module for Icinga Web 2 later in 2015.
Our 6th year … oh, I could tell you even more stories from the Icinga family, but I’m leaving this for meeting you at the Icinga Camps having some G&T together 🙂