You may have heard it already – 2.3 adds lots of new features,Â for exampleÂ object attribute accessors at runtimeÂ accompanied by functions, loops, conditionals and much more. Bringing you Icinga 2 v2.3.0Â also means: 660 Git commits since 2.2.0, 94 features & 127 bug fixes.
While upgradingÂ your Icinga 2 installation, you can test-drive the new language features in the new live consoleÂ online on icinga.org. Grab a coffee, check additional feature details below, switch to the Changelog and once your upgrade has finished, get to work with the all new shiny Icinga 2 v2.3.0. The online documentation is currently undergoing changes, things to note: live search and removable tables of content tab.

This was frequently asked in the past: “How can IÂ inherit values from the host to the service, and leave it to a default value if not set?”Â Consider it done with if-then-else-if-else conditions inside the Icinga 2 configuration language. The example shows a fallback to the host’s FQDNÂ if its address6 attribute has not been set – cool, isn’t it?

You can now define your own functionsÂ including theÂ return keyword. That includes locally scoped variables identified by the varÂ keyword and anonymous lambda functions too.Â We’ve thought about functions and their use cases for Icinga 2. One thing we came up with is the Boolean return value for set_if inside command arguments – not only a macro string value, but also nearly any condition. Same applies for command argument values. The short way of assigning return values is putting them in double curly brackets {{ …. }}.

You’ve seen for loops already inside the fancy apply for rulesÂ introduced with 2.2. Using while and forÂ loops including break and continue keywords has been experimental for Icinga Web 2’s Vagrant Box quite a while. In real-life scenarios you would use them in combination with functions and if-then-else conditions iteratingÂ over arrays and dictionaries defined in custom attributes. 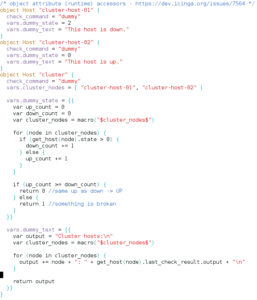 Digging up the old problem with so-called “on-demand macros” in Icinga 1.x and migration issues we’ve tackled this one differently: Instead of obfuscating the macro parser once again, the problem is solved differentlyÂ – you’d want to access objects and their run-time attributes. Most commonly, get_host(NodeName).state for the old-fashioned check_cluster plugin. And many, many objects and attributes more …
That syntax could be used for cluster checks and business processes inside Icinga 2 – we’ll tackle the dummy check problem sooner or later, promise! 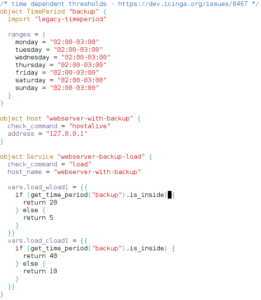 Right before the feature freeze one of our colleagues approached us with the request of time-dependent check threshold values. We’ve already had if-conditions and object accessor functions thus far, and so added the is_inside run-time attribute to the get_time_period() function. That way you can setÂ thresholds depending on the current time of the day.

Defined an array, but need it in a sorted manner? Remove a dictionary item inherited from a template? Split a string into parts? Not an issue anymore.

Test all the language features inside the Icinga 2 console. Install rlwrap to keep history and line continuation and test-drive your new configuration before putting into the files.

Find the detailed Changelog in the “What’s new” section in the documentation!