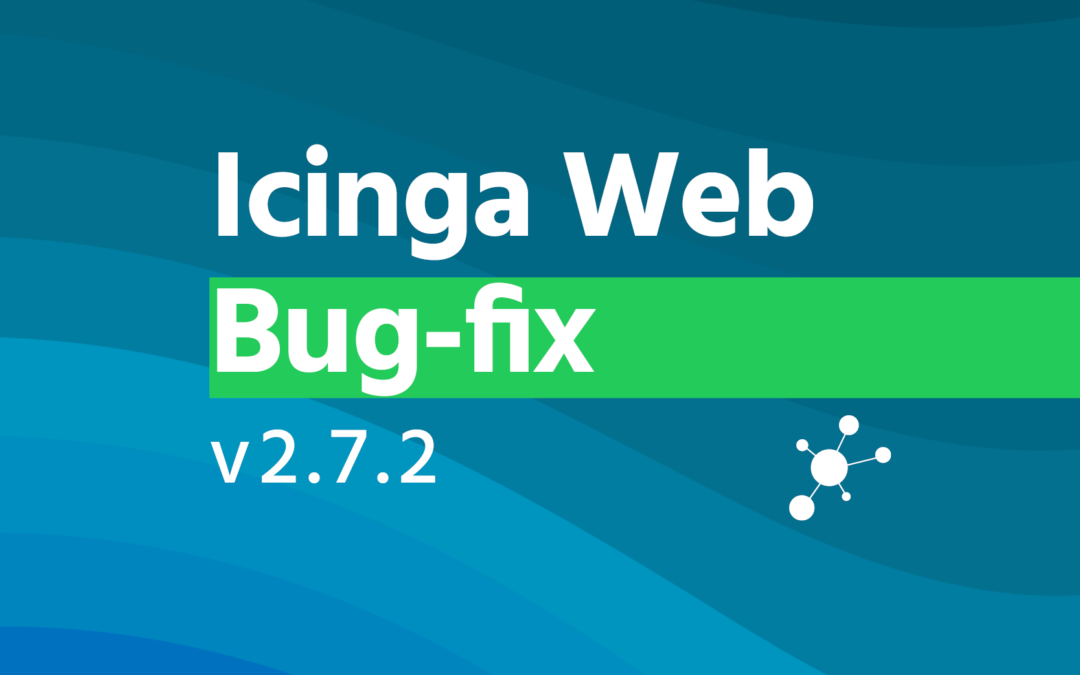 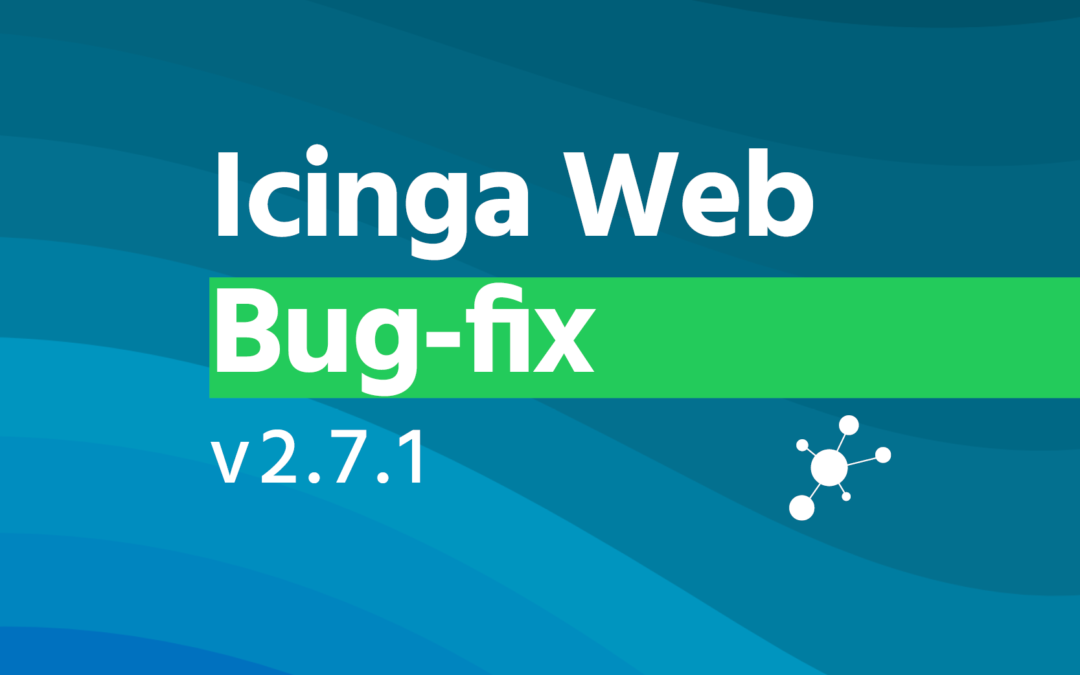 Usually we try to include only bugs in minor-releases. Sorry, bug-fixes, of course. But thanks to @winem_ we have also a little enhancement this time: Links in comments, notes, etc. are now highlighted as such.

Nobody’s Perfect, Not Even Developers

We knew it. We saw it coming. And forgot about it. Some views, especially histories, showed an anarchic behavior since v2.7.0. The change responsible for this has been undone and history’s order is reestablished now.

A fix unfortunately caused restrictions using wildcards to show no results anymore. This is now solved and such restrictions are as permissive as ever. 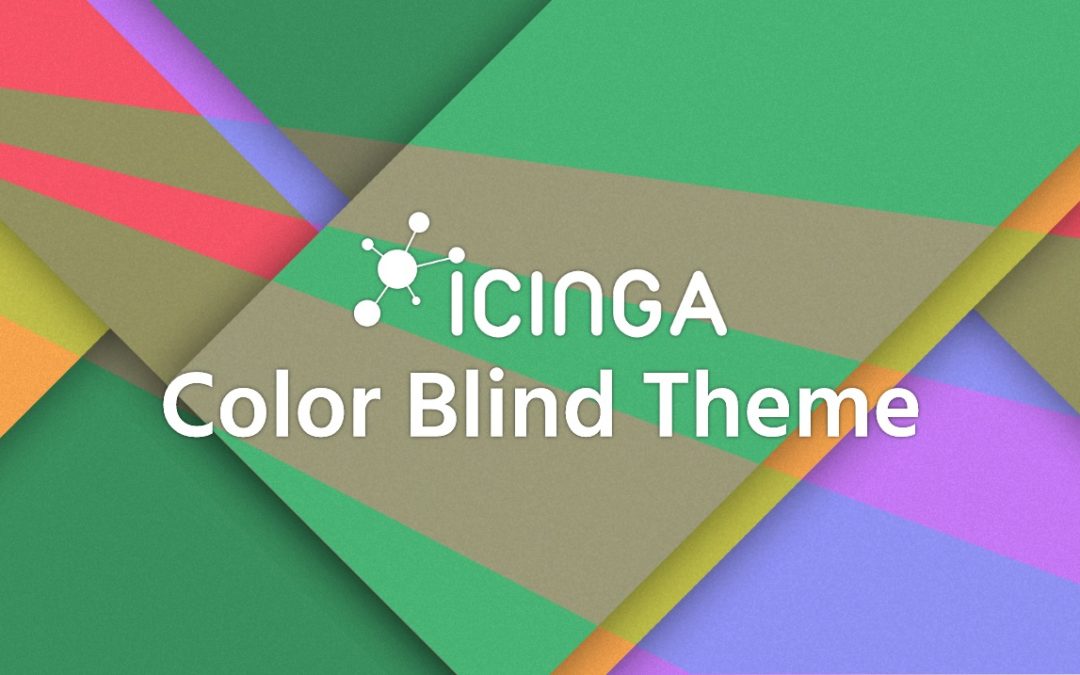 Give your Icinga Web 2 a new look – with official ‘Color Blind Theme’ introduced in version 2.7.0! Not just for people with impaired colour vision – with a fresh and well rounded new palette, the new theme is a real looker!

It’s important for us that everyone has the chance to use our tools with maximum effectiveness.We took an existing module from our Icinga Partner Sol1 – icingaweb2-theme-colourblind by Andrew Foster – refined it a little and it is now part of the default Icinga Web 2 colour scheme bundle!

What’s with the change?

The colorblind theme by Sol1 was already very well made, but we saw some minor issues with the chosen colours in terms of:

So in the top, there is the default Icinga colour scheme – with mocks of the three types of colour deficiency we focused on during the development for the module.
In the middle row you can see the module Sol1 provided
Last row is the new theme which is integrated into the Icinga Web 2 core now.

Another minor detail to improve was the colour of the WARNING (handled) state, which didn’t really fit in with the rest:

So in order to both have the context in which the colours are used preserved and have some sort of hierarchy in severeness of the states some changes needed to be made.

This warranted for a change both in brightness and hue for the OK green as well, so it could be distinguished from the WARNING (handled) yellow:

Visual representation of changes in hue, saturation and brightness.

There have also been some changes to the font colour:
Handled states (Including OK for urgencies sake) are now displayed with black text.

This makes it a lot easier to distinguish between handled and unhandled states in the blink of an eye.

Badges with the different themes

In case you want to build your own theme, there is a helpful article on the topic from our Partner Würth Phoenix. If you have any issues, feedback or inspiration – please tell us about it here or open an issue on github.

And by the way, I will be speaking about this topic at the Icinga Camp Stockholm as well! 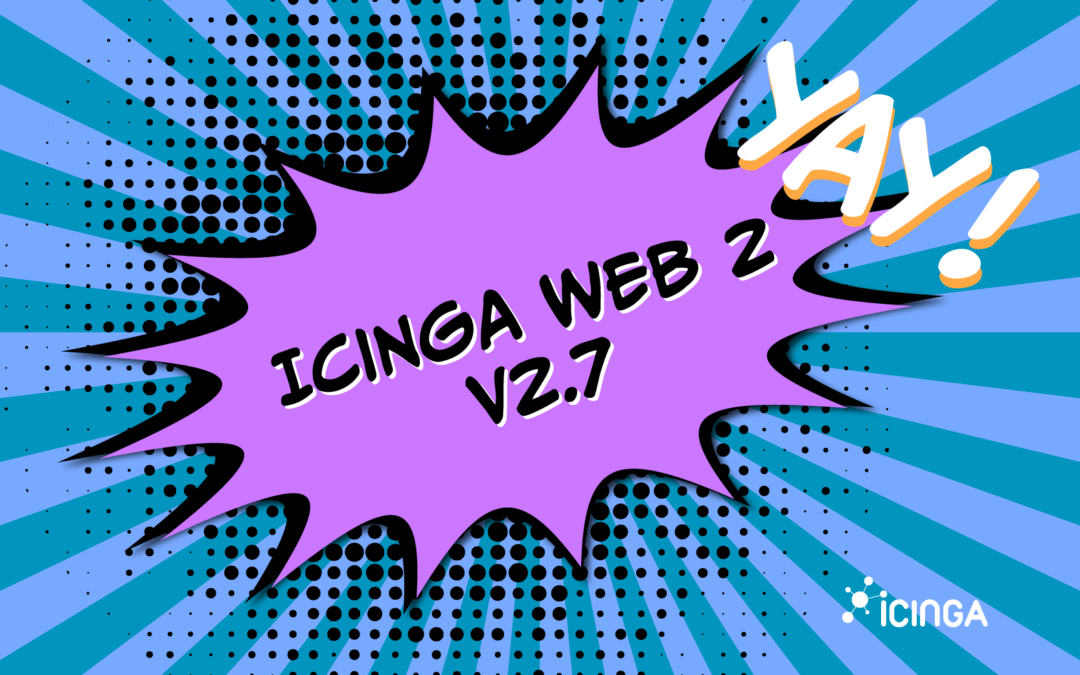 We are happy to announce a new release for Icinga Web 2, version 2.7.0. Official packages are available on packages.icinga.com. You can find all issues related to this release on our Roadmap.

All the Japanese and Ukrainian monitoring enthusiasts can now appreciate our web-frontend in their native tongue. Being so late to the party is also of their advantage, though. Because they can adjust their dashboard without worrying it gets broke with the next update. (All other admins with non-english users, please have a look at our upgrading documentation)

With this release module developers got additional ways to customize Icinga Web 2. Whether you ever wanted to hook into a configuration form’s handling, to perform your very own Ajax requests or enhance our multi-select views with fancy graphs. All is possible now.

Users with color deficiencies now have a built-in theme to ease navigating within Icinga Web 2. Also, our forms got a long overdue re-design and now look less boring. Though, the best of all features is that clicking while holding the Ctrl-key now actually opens a new browser tab! Lost comments? No more. Defining an expiry date again? No more!

Some of you know that some checks tend to produce walls of text or measure (too) many interfaces. Now, plugin output and performance data will collapse if they exceed a certain height. If necessary they can of course be expanded and keep that way across browser restarts. The same is also true for the sidebar. (Though, this one stays collapsed)

Since we now have the possibility to collapse large content dynamically, we allow you to add entire wiki pages to hosts and services. Though, if you prefer to use a real wiki to maintain those (what we’d strongly suggest) it’s now easier than ever before to link to it. Copy url, paste url, submit comment, Done.

Things You Have Missed Previously

The tactical overview, our fancy pie charts, is now the very first result when you search something in the sidebar. If you’ll see two entirely green circles there, relax. Also overdue or unreachable checks are now appropriately marked in list views and the service grid now allows you to switch between everything or problems only.

Roles can now be even more tailored to users since the introduction of a new placeholder. This placeholder allows to use a user’s name in restrictions. Things like _service_responsible_person=$user:local_name$ are now possible. The audit log now receives failed login-attempts, that’s been made possible since hooks can now run for anonymous users.

See also the audit module which got an update and is required for #3856 to work. 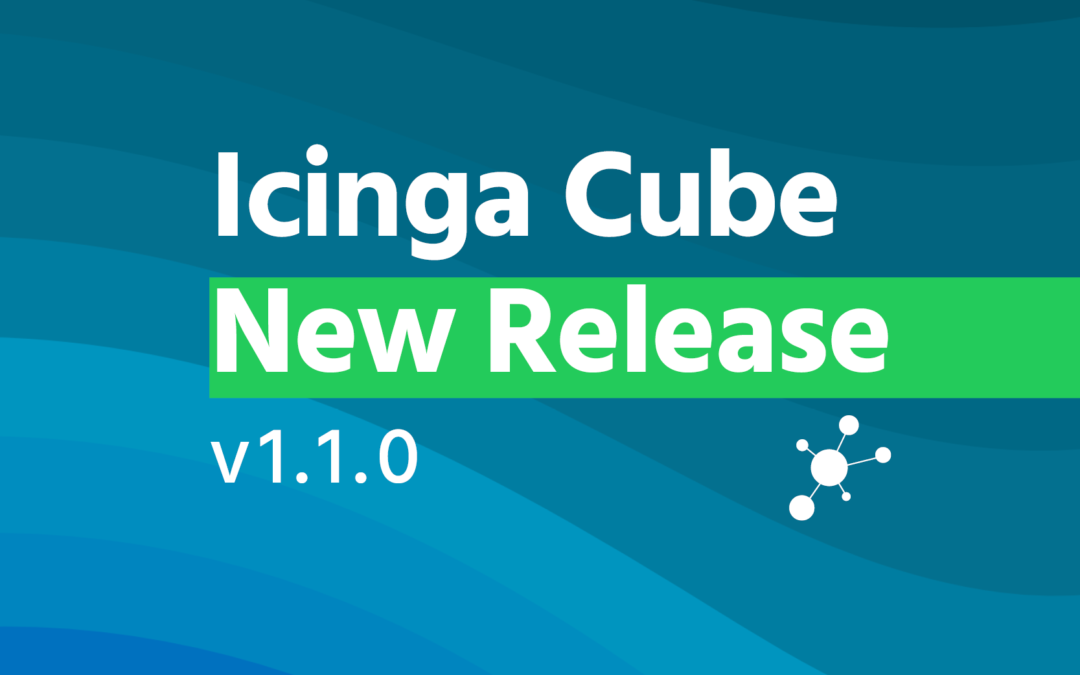 As a little introduction for everyone who has not heard about the cube yet:

The cube module is there to show statistics grouped by the custom variables that have been set for the hosts and services. They are then displayed in up to three dimensions for a quick overview to show the relations.

The services are going cubin’!

The most prominent change is the addition of services:
While it used to be only possible to have the hosts in a cube, the module has now been extended to provide full functionality with services as well.

You can easily switch between hosts and services, while we keep the filters of your cube in place!

No more SQL dump crashes! (or at least fewer)

PostgreSQL rollup syntax errors are now smoothed out and will work as intended – also including the documentation for the requirements.
Having custom variables names like SQL keywords also no longer break the cube!

Restrictions are in place

Adds a filter that considers protected custom variables.
The cube now polls the restrictions set in the monitoring module and only shows the hosts that the user has permission to view.

And just a pinch of UX

Removed the possibility to add more than three dimensions to the cube – we live in a three dimensional world after all.
When the name of a cube tile is too long to fit, it will no longer push everything else downwards but be shortened with an ellipsis instead!

The URL encoding has been adapted so that both white spaces and umlauts are now supported!
Name your vars however you like! 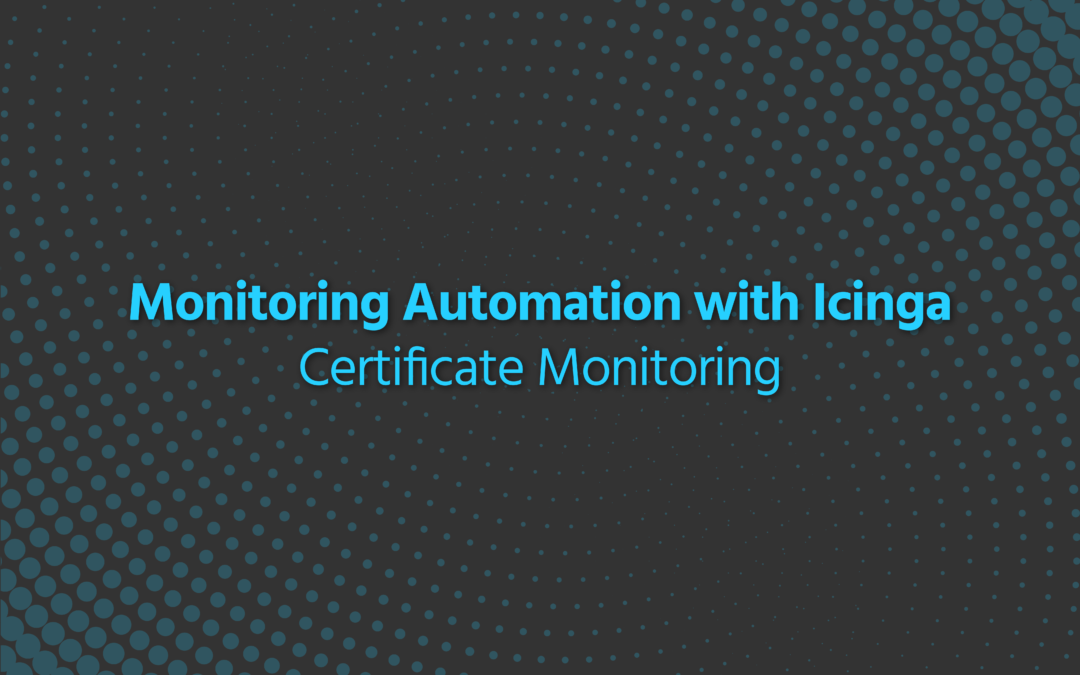 In our ongoing efforts to make it easier to automate monitoring environments we recently introduced a new module for Icinga Web 2.

This module is first and foremost a platform which lets you have an overview over all the certificates you are using in your environment to prove the identity of your devices. You can take a quick glance or a very detailed look at them. It will help you to know exactly how your certificates are distributed based on the signing certificate authority, the used algorithms and key strengths as well as which certificate expires next.

It helps with automation

You don’t need to register each device or certificate by hand. The module will scan the networks you’ll provide it with and harvest any certificates it encounters. Whether it does this regularly or on demand is fully up to you.

Networks are provided by setting up jobs. These jobs define several IP ranges in CIDR notation and ports. Schedules in CRON format may also be set for jobs so that this module’s daemon runs them regularly.

Integrates well with your environment

Cloud hosting and virtual machines are on the rise for a long time now and with SNI (Server Name Indication) a single host may easily present different certificates on the same endpoint. In order to facilitate this, the module can be told to scan an endpoint multiple times by setting up SNI maps.

Installed alongside the monitoring module, Icinga Certificate Monitoring even accesses its database backend to fetch SNI information.¹ This will help to match results found in the scan process to already known hostnames in your monitoring environment.

Let’s be honest, everyone has sometimes missed to re-new or replace expired certificates. The module provides detailed views showing you exactly which certificates require your attention.

Though, if you’re not proactively looking at the user interface the check command shipped with this module may help with setting up notifications in Icinga.

Bridging the gap with the Director 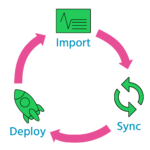 With all this talk about automation one has to wonder how to establish a link between this module’s knowledge about certificates and Icinga’s configuration. You’re right if you think of the Director’s import and synchronization functionality now.

The module lets you easily import known hosts or certificates with its own import sources. By setting this up you only have to define jobs for it and all the rest is handled automatically.