August brought us the Icinga Web 2 Map module, tipps and tricks for Icinga and more integrations. The schedule for OSMC 2017 was announced, where developers and community members will meet and also give talks this time. Icinga Camp Berlin happens on March 8th, 2018 – CfP and early bird is open!
We’ve reached more thanÂ 1000 GitHub stars for our projects – thank you! 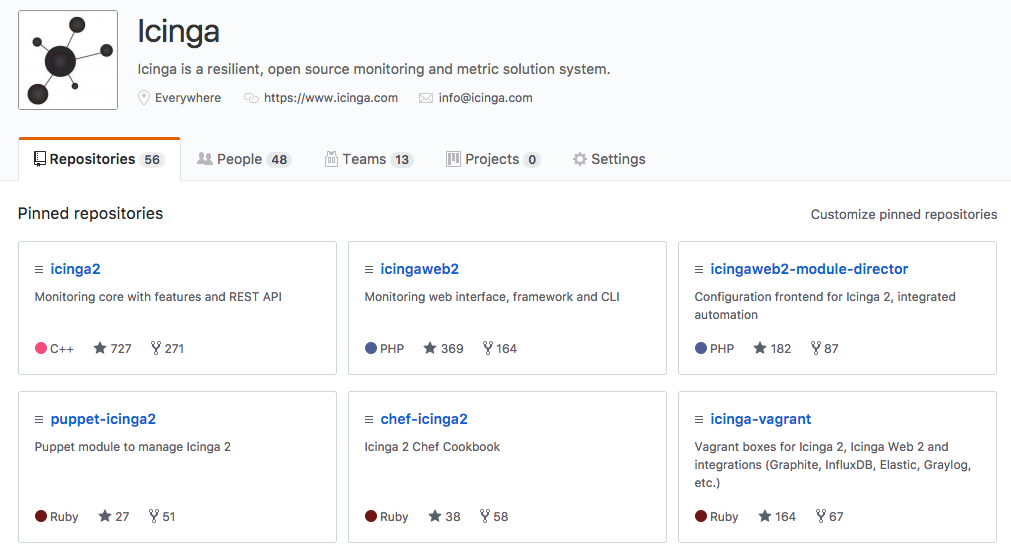 In case you have troubles with the mail notifications scripts in the latest Icinga 2 v2.7 update, please checkout this advisory.
Users also reported problems with certificatesÂ on OpenSSL 1.1.0. The latter is used on Debian Stretch and the Windows packages. The certificates should have been created in 2015. Checkout this advisory to see if you are affected and how to fix the certificates.
In case you are having trouble with Icinga Web 2 v2.4.1 and Icinga 2 v2.7.0, API command transport and acknowledgements, look into this fix.
Francesco contributed installation docs for Icinga 2 on Alpine Linux. This should ease your way into small Docker deployments.

We are proud to welcome Simon Murray on team Icinga 🙂 His magnificent work on the InfluxDB feature in Icinga 2, including hotfixes for the recent v2.7, continues on the official core team 🙂

Proud to announce our next Icinga Camp in Berlin on March 8th, 2018. CfP is open and early bird tickets for sale – https://t.co/lwoiMB9o81

The schedule for OSMC 2017 is here, 30 talks on monitoring, many highlighting Icinga 🙂

Jackpot @Mikeschova – #osmc talk on day 1, room Jacobi and right before lunch. So we have room & time 😀 https://t.co/RH8JlpkdT0 pic.twitter.com/g8mKc4aHEp

The slides from our CfgMgmtCamp PDX talk on “Monitoring as code” are online:

Nicolai updated the Maps module for Icinga Web 2 to provide dashlets 😀 Read more about the module in this blog post.

Michael is preparing a new NSClient++ 0.5.1 release – make sure to check it out, it also includes the newÂ REST API documentation.

Our partner Shadow-Soft introduced the advantages of the Icinga Director this month:

Icinga Director: What is it? How can it help you? https://t.co/x7WYxdcK1R

Christian showed us how to monitor a Raspberry PI client in his blog post:

The #Firefox #AddOn #imoin for #Icinga is now available as a #WebExtension version: https://t.co/VvrgkYDnMO

Help Ricardo with his newest contribution on monitoring Netscaler:

This github PR https://t.co/rwToGogWzB to monitor Netscaler with @icinga needs some further testing. Would be awesome if anyone could help.

Nicolai is a real Icinga fan 🙂

That’s it for August – stay safe and plan your OSMC trip to Nuremberg in November!